May is “What’s Next” month at Field & Stream magazine and, judging by its cover, women are the next big thing in outdoor sports and conservation. Eva Shockey, bowhunting celebrity and TV host, is the first woman to grace the publication’s cover in 30 years. 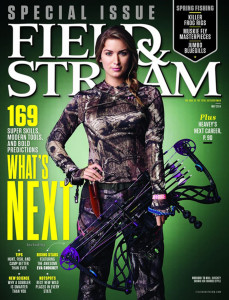 Shockey is only the second woman to appear alone on the cover. The first was Queen Elizabeth, pictured with her hunting dogs on Field & Stream’s January 1976 cover. According to the magazine’s publisher, a handful of women have appeared on the cover with men. And we’re talking about lots of covers: 1,428 in the magazine’s 119-year history.

Movies like “The Hunger Games” and “Brave,” and television shows like “Teen Wolf” and “Arrow” have fueled recreational and competitive archery dreams for young women nationwide, as evidenced by massive increases in female archers reported by USA Archery and other membership organizations. The archery industry also reports more sales to women at major retailers such as Bass Pro Shops.

“The steady and growing number of women who are becoming hunters is really transformative for the outdoor sports,” said Anthony Licata, editorial director of Field & Stream. “As a spokeswoman for that change, Eva was a clear choice for our “What’s Next” issue.”

New growth markets for fishing and bowhunting include urban hipsters, suburban locavores, homesteaders and those who focus on ethical eating – including women.

Archery Is On The Rise With Help From Movies Like ‘Catching Fire̵...